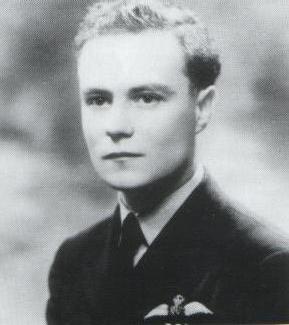 Tonight marks the anniversary of one of the largest raids of the Second World War against V1 Flying Bomb sites in northern France. A total of 739 Bomber Command aircraft attacked seven targets. German nightfighters exacted their toll and 22 Lancasters failed to return.

When I was researching these raids for the book Sledgehammers for Tintacks – Bomber Command Combats the V-1 menace I had the pleasure of interviewing and corresponding with No. 61 Squadron pilot Don Street DFC, who provided the following account of his part in the attack against the flying bomb launch site at Prouville.

From the time the Lancaster force crossed the enemy coast it was running the gauntlet down a corridor of searchlights through to the target area . . . ‘Y’ Yoke was detailed to fly in the second wave of the attack and thus we were able to observe a frightening spectacle as we approached. A number of blue/white master beam searchlights, radar controlled, it was said, moved across the sky in positive movements. One would fasten onto an unfortunate aircraft and was immediately backed up by four or five white searchlight beams. Once coned it was difficult to evade or slip away into the comparative safety of the dark night.

My mid upper gunner, Sergeant Peter ‘Jock’ Haddon, had good all round vision from his turret: ‘Skipper. They are using nightfighters!’

I blinked upwards from the flying panel instruments to the scene ahead and just caught sight of a line of orange dots in the dark sky disappearing into an aircraft held in a searchlight cone.

‘Pilot to crew. I’m going to drop my seat now and concentrate on instruments.’ Directional gyro, artificial horizon, airspeed, altitude, turn and bank – rate of climb and descent, the panel so familiar to all night fliers. I fiddled about with the seat controls and it dropped with a bit of a thud. When I had re-aligned my sight on the panel I called:

‘Pilot to crew. Now if we are coned, gunners try and shoot down the beams, you might knock some out. We’ll go into corkscrew, they won’t get us.’

Although the sky was crowded there was still plenty of airspace and I knew that other crews would keep clear of an aircraft caught in a cone, happy, as I would be, that someone else was claiming attention from the enemy.

‘Y’ Yoke, lumbering along at a steady 155 mph indicated airspeed, was now well into the forest of light beams and we were hoping that we might have the luck to sneak through. There was an almost audible click as a blue beam locked onto our aircraft and the cone was immediately completed as the white slave beams swung into position. A white void held our aircraft suspended, vulnerable and helpless. Inside the plane everywhere was a blinding glare, picking out rivets, scraps of aluminium, shiny where paint had worn off, every nook and cranny not noticed before, all seen in an instant of time. Shoot down the beams I had said, but where was down, where were the searchlight batteries?

Except for the navigator, Warrant Officer Dave Grant RCAF, who always kept his head in the office with the curtains securely drawn, maintaining that he had problems enough without worrying about what was going on outside, the rest of the crew experienced a momentary shock. The sudden change from comparative safety of darkness to the total exposure in a light too bright to look at was a physical blow. It was however but a split second in time before the survival instinct surfaced.

‘Hang on everybody. We’re going down.’

A terse comment as I rammed the control column forward and dropped the port wing in a diving turn to the left. The altimeter unwound losing height by 500 feet – 1000 – 1500 – 2000. I rolled the aircraft over to a starboard turn still losing height. The dammed searchlights still held us. 2500 – 3000 – 3500 – 3700 feet then they were gone as suddenly as they came, blackness all around. I reached forward and turned on the orange shaded cockpit light and hauled the aircraft back onto course.

‘Everyone OK?’ I asked. The ‘OK Skip’ reassured me that I still had an operational crew. Well almost. My navigator complained. He would be as soon as he had found his goddam pencil and a few other tools of the trade.